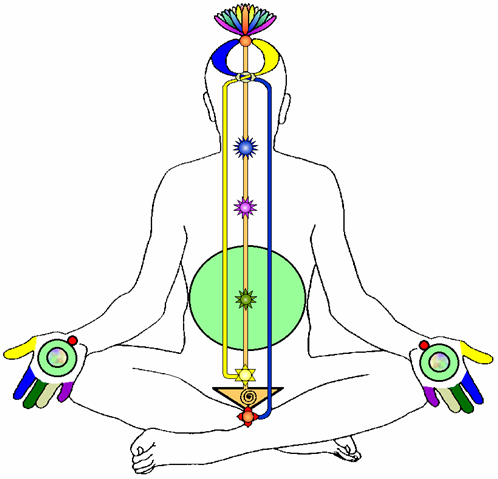 Kundalini is the power of pure desire within us, a motherly and soothing spiritual energy which lies dormant at the base of the spine in the sacrum bone (the ancient civilizations knew that in this bone resides a sacred energy).

Self Realization is the awakening of the Kundalini through the central channel, piercing through the six chakras above the sacrum bone and emerging at the top of the head (fontanelle bone area) as a gentle “fountain” of coolness.

The word fontanelle itself means “little fountain” which shows again the ancient knowledge about this phenomenon of Self Realization.

Self Realization has always been the ultimate goal of all religions and spiritual traditions of the world, but was extremely difficult to attain in the past. It has now become a mass phenomenon achieved effortlessly through Sahaja Yoga, which is Shri Mataji’s invaluable gift to humanity.

In Shri Mataji’s own words, “Self Realization is the first encounter with Reality”. “We have the Mother within ourselves, in our hearts, and if She is awakened, She is going to look after us. She is going to give all the protection that is needed. And there is nothing to be frightened of.”

“Kundalini cures you, she improves you, she bestows all the blissful things upon you. She takes you away from the worries at the grosser level”, says Shri Mataji.

The manifestation of the Kundalini energy is called vibrations , which is an approximate translation of the Sanskrit term Chaitanya. In Shri Mataji’s words, “Chaitanya (vibrations) is the integrated force of your physiological, mental, emotional and religious Selves.”